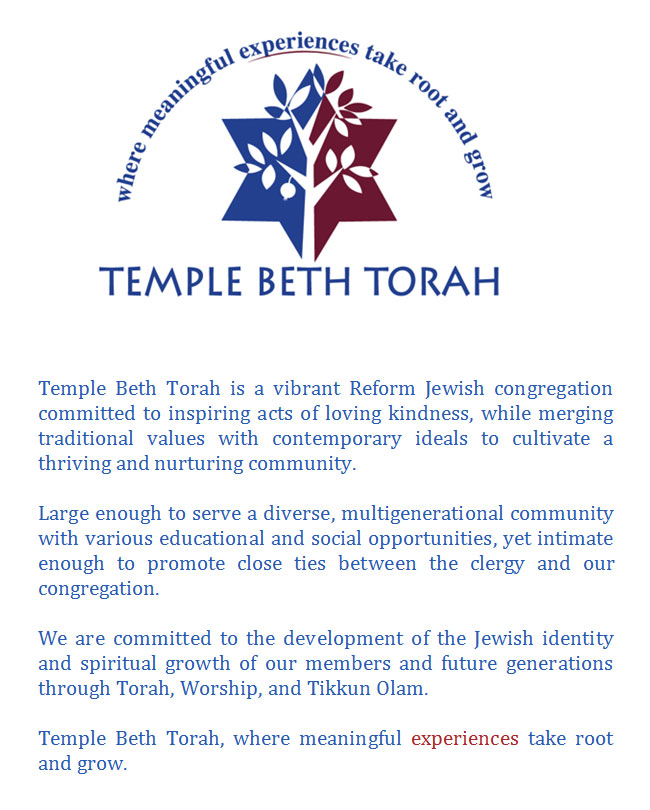 “How does one begin to tell the story of what a Synagogue is and what it has been through the ages. Where do we begin to describe the meaning it has in our daily lives, and in the values we shall want our children to Learn and to live by?  With what words shall we try to express what the Synagogue meant to our Fathers and their Fathers before them?  A temple is somehow always more than the sum of its parts.  It is something that is even beyond the warmth and the feeling of Sabbath and Holy Days.  It cannot be contained in a list of scheduled programs and activities.  Its’ meaning is not Found alone in the Adult Education Classes, nor in Forums and Panel Discussions.  It is more than the fellowship found in the Sisterhood or Brotherhood. The Synagogue even transcends the sound of the voices of Children in study and at play.  For a Temple is not something in space alone that can be described.  It is a part of time that has to be experienced together.”

So wrote our then Rabbi, Robert Schenkerman in 1974 as we launched the building campaign for our new permanent home. But the story of Temple Beth Torah does not begin there.

In early 1969, Jay and Barbara Moelis, a young couple residing in South Huntington, recognized the need for a Reform Temple to service the growing Jewish community in the southern portion of Huntington. They brought together like-minded residents, approached the Union of American Hebrew Congregations for advice on organizing a new temple, secured the use of King of Kings Church for an initial community meeting, and set the ball in motion.

The first public meeting was held in April 1969. At the end of the evening forty families signed on as “charter members”. Immediately committees of volunteers were formed to pick a name, write a constitution, plan for religious services, organize a school program, and work on membership development. These efforts led to a congregation that reached 100 families on the eve of its first worship service. That service was on erev Rosh Hashanah, and was held in the gymnasium/auditorium of the Suffolk Developmental Center (now the site of The Greens).

The fledging congregation was led by a student Rabbi during its first year, Rabbi Earl Vinokur. He was invited to stay on in a full time position upon his graduation, but he elected to journey to a pulpit in South Africa. Rabbi Jerrold Levy was the first full time Rabbi at Temple Beth Torah. He served our community for two years before moving on to a larger congregation. He was succeeded by Rabbi S. Howard Schwartz, and later by Rabbi Schenkerman.

During the first two years weekly religious services were held only on Friday nights in the King of Kings Lutheran Church on Old South Path. The religious school also met at King of Kings, usually on Saturday mornings so as not to conflict with their congregation’s use of their own building. The Reverend James Sorenson was a true friend to Temple Beth Torah, and our existence today can be traced, in large part, to his cooperative efforts. The use of King of Kings Church continued, on a gradually diminishing basis, until the first phase of our permanent building was completed.

In the third year of our existence we purchased a one-family house on Carman Road and converted it to classroom space and a small sanctuary. When larger assemblies of worshippers were expected, like holidays and B’nai Mitzvah occasions, services were moved to King of Kings Church. Saturday morning services were only held on B’nai Mitzvah occasions.

High Holy Day services were held at the Suffolk Developmental Center until Phase One construction was completed. This enabled us to accommodate the growing population of members and their holiday guests. Beth Torah reciprocated by inviting the Jewish residents of the Developmental Center to attend services as our guests.

We soon outgrew our little house on Carman Road and began the search for a more permanent home. The land was purchased and groundbreaking for our current building took place in 1974. The cornerstone for our building was commissioned on our first congregational trip to Israel in that same decade.

“SEEK THE PEACE OF JERUSALEM”
“The stone was heavy. The tired hands strained under its weight. The tired hands Strained under its weight. These were not the calloused, weathered hands that had Cut, carved and carted the stones that became the cities of Pharoh. They were The sensitive hands of a modern professional man. The stone being transported Held a special significance. It had been carried over 6,000 miles from the holy City of Jerusalem to Dix Hills, New York. It was destined to become part of the Temple building, the cornerstone of Temple Beth Torah.”  – Ann Klein

Since the original building was completed in 1976, the Temple has grown from 300 families to its present 750 families, and the building has been expanded several times. First in 1984 when the present Sanctuary was added, followed by the Jeffrey Zuckerman Youth Lounge and the Atrium. Who can forget then Governor Mario Cuomo taking the shovel from our then young Rabbi, Marc Gellman who was having trouble putting it into the ground and saying, “please Rabbi, my people are more experienced in this area than yours”.  And once again in 1996 with the expansion of our Sanctuary and the addition of a balcony.  In July 1997 we felt the need to provide our Temple Family with a state of the art catering facility.  A long-term agreement was made with Morrell Caterers and we added the Rubin Ballroom, our new kitchen, renovated our existing social hall and added a circular driveway and canopy making the physical facility worthy of our dynamic and growing Temple Community.  Finally, in 2001 we completed the expansion of our building with the addition of space to what is now the Harriet and John Wolf Learning Center, encompasing both additional classrooms and the Weingrow Multi Media Center.

But a Temple is more than just bricks and mortar. It is the people who lead it, both lay and professional, who give it it’s soul.

It is difficult to believe that we have had only five head Rabbis since 1969 (Levy, Schwartz, Schenkerman, Gellman and Moskowitz).

Music plays an overriding role in Jewish life and prayer. We have been blessed with various Cantors who have served.  Cantor Steven Stein, who joined our Congregation in 1998, together with Joseph Graffeo who has been our Music Director for over two decades, and our all volunteer Temple Choir bring a particular level of spirituality and beauty to our services.

Our religious School which now serves well over 400 students and is headed by our Rabbi Educator Rabbi Rachel Wiesenberg and a staff of more than 30 teaching professionals began very modestly.  In its first year the Temple ran its religious school with volunteers from the Congregation.  It was not until our second year that we hired professional teachers.  In September 1989, we joined with Temple Beth David and Temple Beth El to provide our children with the opportunity to attend a Community Hebrew High School, which now also includes Temple Chaverim.  In 1992 , with the expertise and guidance of Jerry Manton the David Joshua Berg Nursery School opened its doors to our pre-schoolers and Paula Rothman was hired as our first Nursery School Director.  The Arthur Goldman Playground was also dedicated that year.  Under the guidance of Zelda Miller since 1998, our now fully certified nursery school has been operating at full capacity for several years.

In 1996 we were fortunate to retain Rabbi Susie Henson Moskowitz as our Rabbi-Educator for the David Joshua Berg Religious School which has, with her guidance become an exciting and dynamic place for our children to receive their Jewish education. Ten years later, in 2006 Rabbi Moskowitz moved to the pulpit on a full-time basis as our associate Rabbi, bringing a warmth and perspective.

Our good fortune does not end with our professional leaders. What would we do without our Officers and Board of Directors who have kept us moving forward while staying solvent over the years?  Where would we be without Marilyn Lieberman who has brought us Art and Culture from within and without?  Where would we be without Harriet Wolf who helped initiate our commitment to the Wyandanch project and Janice Hassenfeld who has not only kept it going but invigorated it for the past several years?  It is not possible to name all of those who have given of themselves over the years. But it is also not possible to forget them, for without them there would be no Temple Beth Torah in Dix Hills, NY and nothing with which to fill it.